Beaconsfield and Officer as neighbouring towns have always been close, especially during the two world wars.

Officer has an Honour Board which is displayed in the local hall (photo included below) and Memorial Gates at the Officer Recreation Reserve.

Newspaper articles written in 1918 in the South Bourke and Mornington Journal, recorded the unveiling of the Honour Roll. 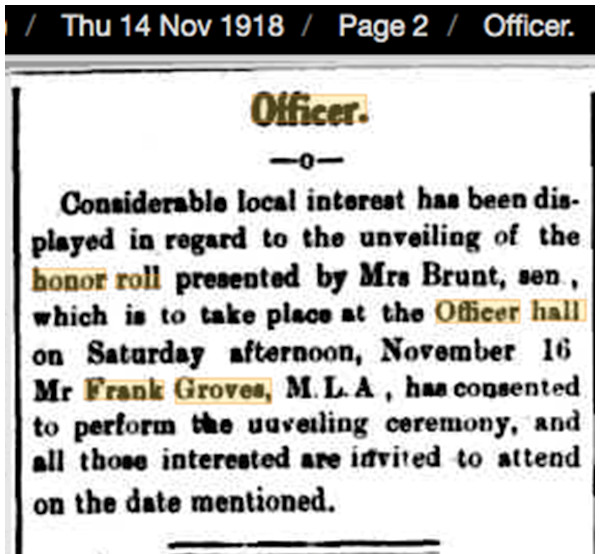 It is difficult to read the following article, but it is the best image available at present.

Officer’s War Memorial is at the Memorial Gates of the recreation reserve as shown in the following images. 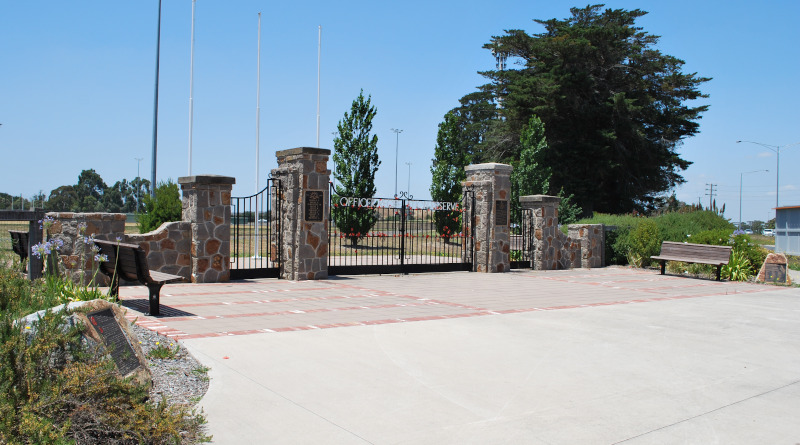 Services are held on Anzac Day and Remembrance Day each year. 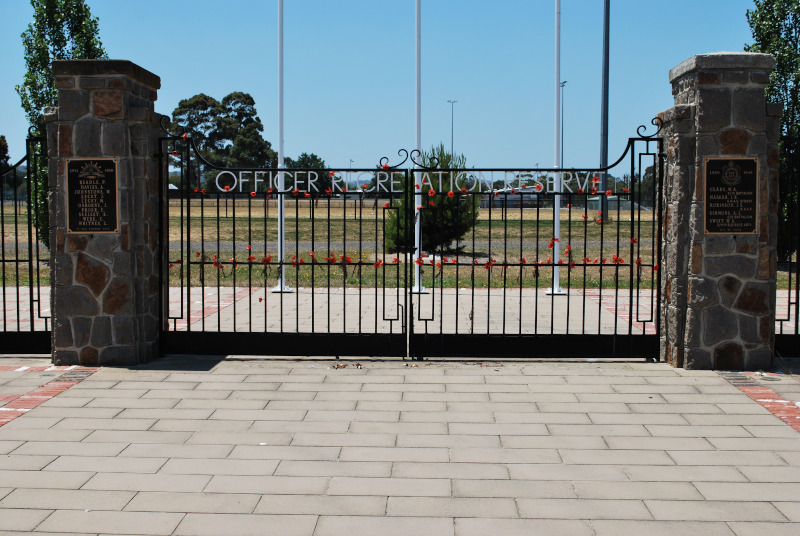 The four bronze plaques are shown below:

Behind the gates is a Lone Pine tree.

To commemorate the Centenary of Armistance on 11th November 2018, a significant research effort was performed to collect the service details of the people who served during World War 1. Many newspaper articles about the soldiers were also collected. The resulting information was formatted into a booklet and the content is produced below in text form and as a PDF file.

The soldiers from Officer who served for their country during the first world war are remembered in this booklet. 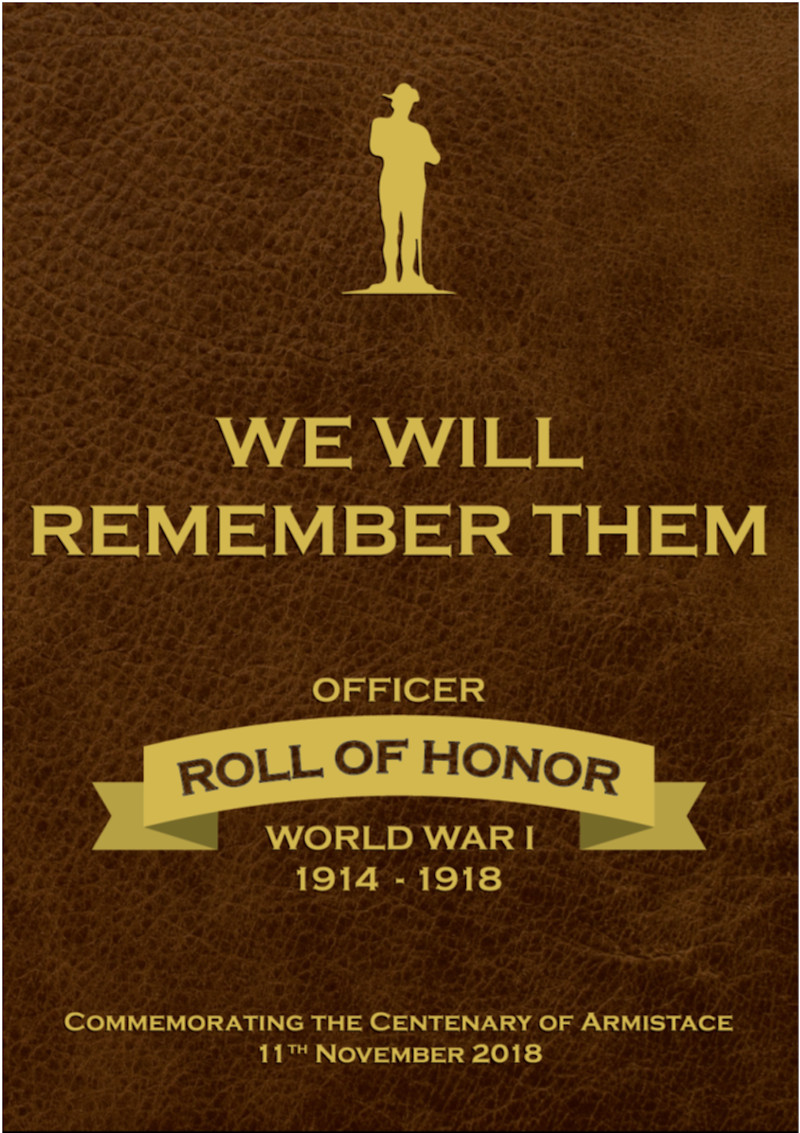 WE WILL REMEMBER THEM

Dedicated to all of the courageous Servicemen and Servicewomen who have served Australia.

Disclaimer:All names, dates and information in this publication has been prepared from the information available and printed in good faith.

No responsibility will be accepted for errors or omissions.

The commonwealth has not participated in the research, production or exercised editorial control over this publication or its contents. The views expressed and conclusions reached herein do not necessarily represent those of the Commonwealth, which expressly disclaims any responsibility for the content or accuracy of this publication.

Download a PDF file containing this document (14.5 MB in size)

We sincerely thank the following:

A poem published in the Nagambie Times on 2nd February, 1917

A Call from the Dardanelles.

As I Lay on the deck of a hospital ship,
At the gate of the Dardanelles,
Mid thunder of warships cannons
And the bursting of giant shells;
Where men were dying in Britain’s cause,
To open the Sultan’s door;
Shrapnel rifle and machine gun fire,
Was raising a living hell on shore.

I thought of three men who were fighting
These thousand miles from home,
Shoulder to shoulder with Australia’s sons
(The clerk and the rolling stone),
Gurkhas, Sikhs and Lancers from India’s Sunny clime;
All had left their near and dear
For a place in the firing line.

Each one had answered the Empire’s call,
Each one doing his bit,
While thousands are resting at home
Equally strong and fit.
Could they but known, could they but see
The soldier and the lar
Fighting together, as Britain’s should,
In the fight at Sedh-al-Bar,

They would throw their aprons to the girls,
Give up their game of whist,
And sing the Tipperary song
As they scramble to enlist.
There is Achi Baba yet to take,
And the forts around Chenark;
These positions must be won,
There must be no hanging back.

We want more men and still more men
Before this can be done;
Do they realise the fact?
God! Will they ever come?
I’m only a rag time soldier,
But I’ll put it to them straight,
Go, now and enter the army
Before it is too late!

Ere the butt of an enemy’s rifle comes
Crushing through your door,
And the blood of innocent children stains
The kitchen floor,
Tell them you are coming,
Tom, Dick and Harry, too;
Shoulder to shoulder, and hand in hand,
And we will pull the empire through.

Officer was originally referred to as the “Officer’s Wood Siding”. With an abundantly wooded landscape, James Lecky, LL Smith and Robert Officer were instrumental in having the train stop to collect the firewood logged on the property of Robert Officer, known as “Greenbanks”. A flag would be displayed, and the Gippsland train would stop at the railway siding to collect the logged timber for transportation to Melbourne.

In 1888 the township became known as Officer.

During the 1880’s land boom in Melbourne, Officer prospered with the abundance of timber available and clay suitable for bricks; there was at least five brick yards at the peek of the building boom. After the housing bust in the late 1880’s, the cleared land was found suitable for orchards to be grown. The orchard industry flourished with the capability of transportation to Melbourne both by railway and road.

Originally there was no store or post office, the mail would be collected from the railway station. The first store was opened in the late 1890’s by Fred Harris.Then the new public hall was approved and built, a “great convenience” for public meetings. In the following years it would be well utilised with regular dances and celebratory events. The local state school began in 1886 and the new wooden school was built on a new site in 1913. Rix and Hicks built new kilns in their brick yards, supplying drain pipes and the like and offering local employment. Several Eucalyptus distilleries produced large quantities of oil which were successful for a few years. There were numerous farms; dairy, poultry, sheep, crop growing, and flower growers, which have been prosperous in Officer for many years. The Progress Association was formed in 1911, as were other community groups, supporting the township.

War intervened; On the 4 August 1914 Great Britain declared war with France against Germany. Two days later the Australian Government offered an Australian expeditionary force and the Commonwealth Government called for volunteers for the Australian Imperial Force. Officer, one of many small towns, was swept up in the conversations and excitement of war, the young men full of enthusiasm and the opportunity of an adventure, began to enlist. In 1918 the Great war came to an end and those that survived returned. Officer was a small town, so the loss of numerous local men had devastating consequences. The fabric of the close community was changed forever. Grief and sadness made the following years a challenge in rebuilding the lives of the families and the town itself. Stoic and hardworking the people of Officer strived forward. As reported some years ago, “The Officer people have a happy knack of pulling together.”

The Officer Union Church built in 1929 by the community, gave the opportunity for all denominations to have a place of worship. The Officer Country Women’s Association began, which was enthusiastically welcomed by the women of Officer. Having played sports on a local property, finally with the acquisition of a 13 acre site, the Officer sports club was officially opened on 17th January 1930. Sport has always been an important activity for the locals to participate and enjoy the break from working life. The Officer Fire Brigade was formed in 1942 another example of the community spirit.

In 1918 a boulevard of trees on the north side of the highway was planted to honour the men who had enlisted from the district. In later years (1970’s) with the widening of the highway the trees have all gone. Clair Whiteside instigated the idea that a committee be formed to erect The War Memorial Gates at the entrance to the Officer Recreation Reserve. The unveiling ceremony took place on Sunday 11 November 1951. Due to the rapid development of Officer and the need for road upgrades, the Officer Memorial Gates were moved to their current location in 2014.

Anzac and Remembrance Day services are now held at the Memorial Gates each year to honour and commemorate all who have served their country including those that made the Supreme Sacrifice.

The soldiers that joined the Australian Infantry forces for “King and Country” could never have imagined the extensive transformation of Officer in this past 100 years.

The soldiers from Officer who served for their country during the first world war are listed below and their service records are shown in the links from their names: 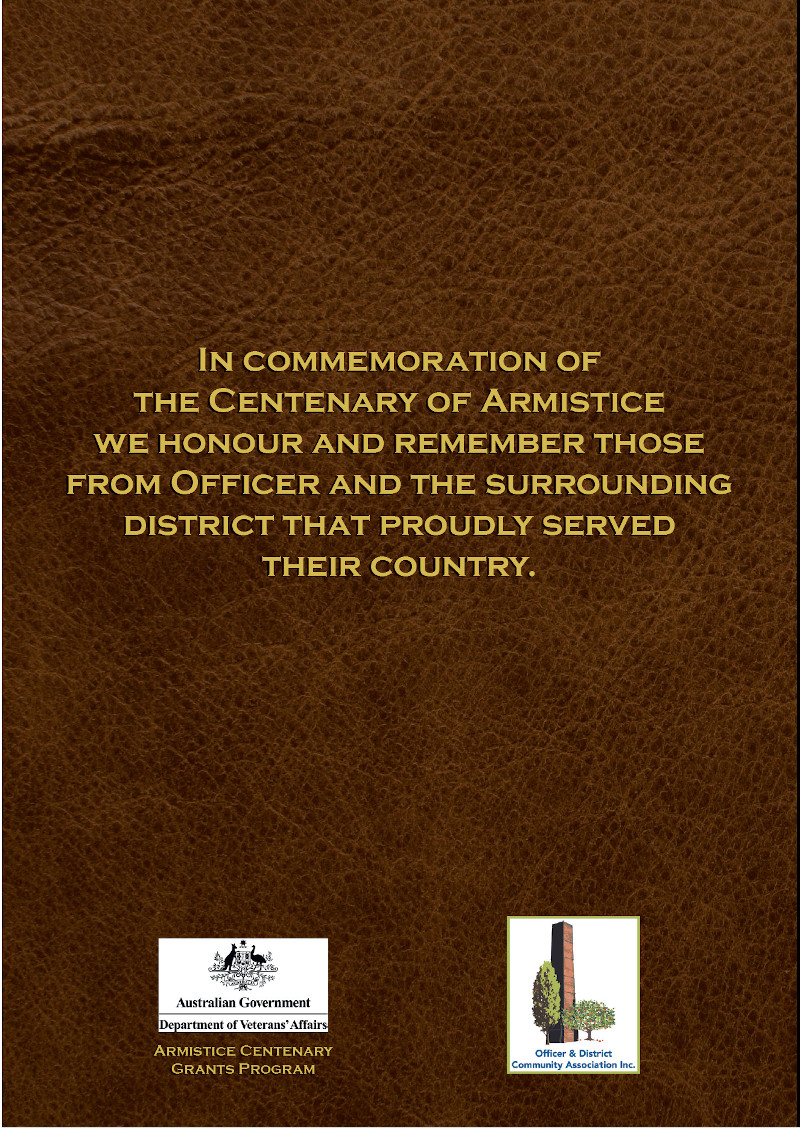 Download a PDF file containing this document (14.5 MB in size)