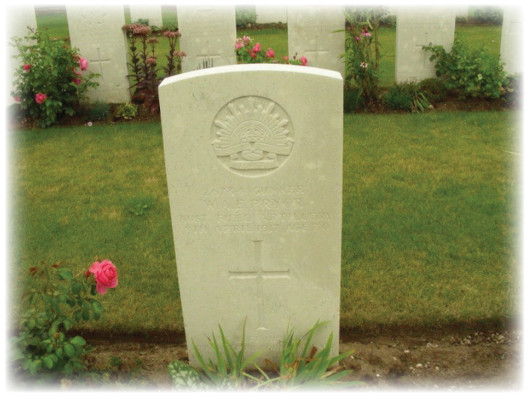 In 1906, William married Mary Jane (Weston). They had one child Violet May.

William Pryor was killed in action in France on the 8th April 1917.

One of the best.

A former resident of this district – Gunner Ern Pryor – was killed in action in France on April 8th. Deceased enlisted in Melbourne and left here in September last. Previous to enlisting he was farming on Sale road, Officer.

On the 26th March 1923, William posthumously received the Victory Medal and, on 6th November 1924, the British War Medal. They were accepted by William’s daughter, Violet.

William Pryor was interred in the Morchies Australian Cemetery, Morchies, Arras, Nord Pas de Calais, France. His name is listed on the Officer Roll of Honor as Pryor. E.