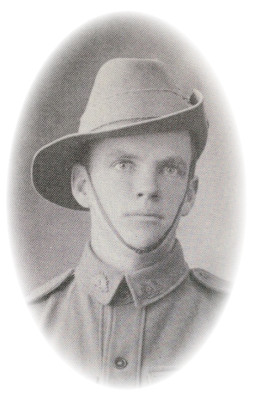 In 1914 Clive owned 250 acres, Lots 15 & 16 Pakenham, the land on the right between Siding Avenue and Cardinia Road and 152 acres; Lot 50 down off McGregor Road when looking at the Parish maps. Clive’s father Francis Wellington Were was a stockbroker who owned Lots 44, 197 acres and Lot 45, 142 acres on the left between McMullen Road and Thewlis Road. After the war all the land was then in the ownership of the father Francis Wellington Were.

Clive was killed in action on 25th April 1915 in Gallipoli (which at that time was a part of the Ottoman Empire).

Clive Were, of Officer, who has fallen at the front, was well known throughout the district, and the news of his death was received with regret by many friends. He was a member of the Pakenham cricket team and a splendid type of an athlete.

OFFICER – An impressive memorial service for the late Private Clive Were, who was killed in action at the Dardanelles, was conducted at Officer on Sunday afternoon last by Canon Hart. There was a large attendance, bearing evidence of the high esteem in which the young soldier was held.

At the memorial service for Clive Were, held on the 27th, collection was made for wounded Australians. A branch of the Red Cross Society has been formed here with a good membership.

Mr John Mason: has taken a lease of Mr Were’s farm where he intends carrying on dairying.

Clive is listed on the Lone Pine Memorial in the Gallipoli Peninsula in Canakkale Province, Turkey.