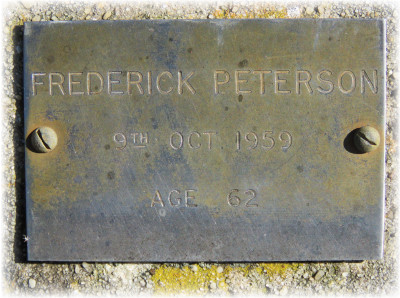 In 1933 Frederick was living in Camperdown. He applied for his medals to be replaced on the 19th August 1936.

Frederick married Christine Tharle Schular in 1944, they did not have any children and they lived in Newport Victoria.

Frederick Victor Peterson, 58 years, railway watchman of Prentice Street Newport, was fined 3 pound at South Melbourne court yesterday on each of 10 charges of obtaining a service pensions by means of false written statements to the Repatriation department.

Mr Molony SM also ordered defendant to make restitution to the Repatriation department of 810 pound 17/6, which has been paid to him in the form of pension payments during the years from 1942 to 1951.

Peterson was told he could make restitution at the rate of 3 pound per week after he had paid off the 30 pound fines.

The prosecution had alleged Peterson in written statements to the repatriation department, had falsely stated that he had no income apart from the pension.

Defendant had actually been employed by the State railways during those years and had earned as much as 10 pound weekly.