Victor Mason Luke returned to Australia on the 10thJune 1919. Discharged on the 2ndAugust 1919.

During the First World War, Victor’s father, Edmund, was a photographer, the first appointed to  David Syme & Co.  His war time contribution was to photograph local men who enlisted for the war. These portraits are included as the Beaconsfield Honour Roll Board. Victor is one of the men photographed.

Victor had a successful signwriting business in Kew, Victoria. 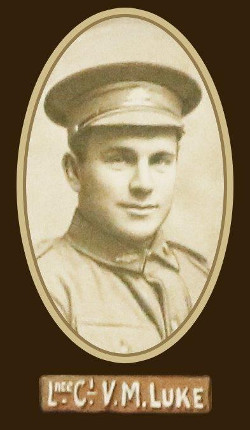 “Victor Mason Luke was duly elected a councillor for the Prospect ward of the City of Kew.”

Died in March 1966 at Heidelberg, Victoria.

Cremated  on the 24th March 1966 at Springvale Botanical Cemetery.