Edmund Thomas May Luke was born in Heathcote, Victoria on 14 January 1864, son of Robert Luke a coach trimmer from Cornwell and Annie Elizabeth May. In 1884 Edmund married Ida Florence Pearson in Geelong, Victoria. After their marriage they lived in Ballarat and then Malvern. They had 8 children, Charles Robert Montague (Monty), Ernest Reginald, Una Florence May, Victor Mason, Lillian Murtle Mabel, Herbert Stanley, Ana Kelvin and Ida Vera Annie. 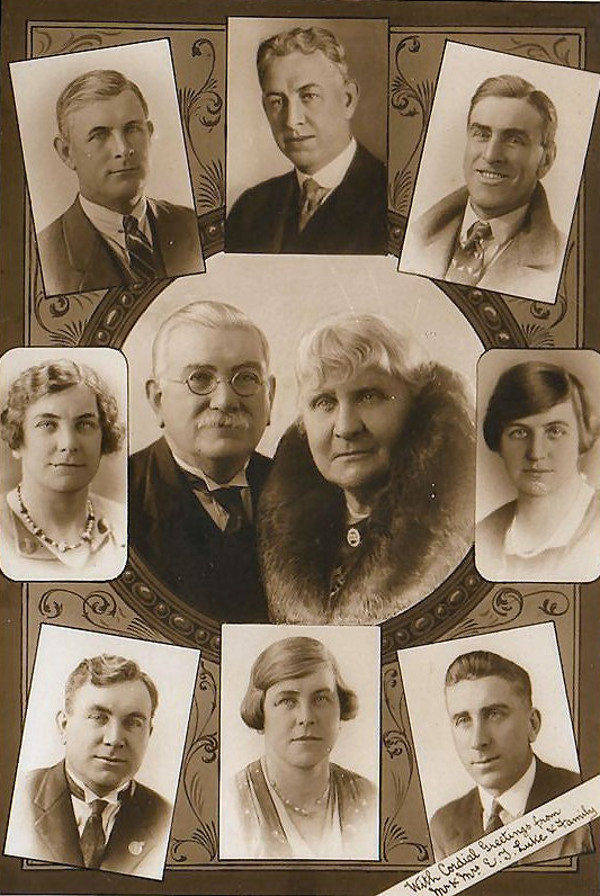 In 1893 Edmund began his employment as a photographer with “The Age” and the companion weekly newspaper, “The Leader”. He travelled extensively in Western Australia for the opening of the Cue Railway Line, this is where he took a photograph of the mine employees, which included Herbert Hoover, who was to become the President of the United States of America.

“Mr. H. C. Hoover. – Among the most recent arrivals of American mining men in Western Australia, has to be chronicled that of Mr Herbert C. Hoover, who has recently taken up the management of Messrs Bewick, Moreing and Co.’s business at Coolgardie, vice Mr H. P. Woodward resigned. Mr Hoover is stated to have had wide experience in the treatment of telluride ores in Colorado, while for two years he was in active connection with the United States Official Survey of the gold producing regions of California, Arizona and Colorado.”

He was Manager of the Sons of Gwalia Mine prior to February 1899.

During 1898 Edmund travelled to New Zealand, where several of his scenery photographs were used as stamps, these were Milford Sound and Mount Cook.

In February 1902, Edmund was the official photographer of the group called “Tour of Senators” searching for a suitable site for the federal capital of Australia. The photographs taken are on file with the National Library of Australia.

In 1909 the Luke family now lived in a home built for them in Caulfield, Edmund’s occupation is recorded as “artist”.

The following year in 1910 Edmund purchased a property of 56 acres on the Beaconsfield Emerald Road, and later after the sale of his property in Buchanan Road he purchased 20 acres adjoining his property which now meant he owned a total of 76 acres.

Mr J. T. Luke, the photographic artist of  “The Leader”, has arrived in Mildura, and will take views of the district. It is 20 years since his previous visit, when Mr Julian Thomas, ”The Vagabond”, accompanied him. A comparison of the old Mildura views with those of the present would be interesting.”

At the council meeting last Saturday the following report was received from Mr O’Donohue dealing with the proposed tourist track along Cardinia Creek : – “I have the honour to place before you my report re a tourist track commencing at the Stony Creek bridge, at Beaconsfield Upper, and terminating at Mr Luke’s. From the bridge downstream for about one mile the creek is very fine. Looking at it and its surroundings as a tourist resort, its chief attraction is the rugged and bold appearance of the banks of the creek, with the granite boulders outcropping everywhere. If the flow of water is permanent in its volume during the summer, near the Stony Creek bridge, it would be money well spent and would add to the attraction of the district, to close up a couple of narrow necks in the boulders and by this means make two very good waterfalls. The country along the creek has been burnt, leaving the banks in places very bare, but the large gum trees on either side are very fine. Where the Stony Creek empties into the Cardinia, down as far as Mr Luke’s, the country is much flatter, and the creek takes many bends, but the country does not appeal to me so much as the Stony creek section. If you decide to cut a tourist track, it would not do to have a dead end. I would recommend a track to run the whole length, namely, from Stony Creek bridge to Mr Luke’s property, the distance over all being about four miles. To clear and form a track 5 feet wide, at 6s 6d a chain, would cost £114; cost of bridge on track, £30. Total £144. The estimated cost for clearing, etc., includes other small items, such as making steps and turnstiles, but does not provide for the suggested waterfalls.” The report was considered satisfactory, and was referred to the members for the Berwick and Beaconsfield ridings. It was agreed, on the motion of Crs Martin and Henty, to send a letter of thanks to Mr O’Donohue, together with a cheque for £2.”

“Mr Luke, who took a flashlight photo on the occasion of the send-off to the Beaconsfield soldiers, has signified his intention of getting out an enlargement, surrounded with the photos of the soldiers and presenting it to the hall committee.”

A sufficient amount of money remains in the hands of the soldiers’ farewell committee to purchase a roll of honour board, to be hung in the public hall. Photographer Luke is preparing an enlargement of the flashlight photo, with the individual photos of the “boys”, which he intends to present to the hall committee as a memento of the historical event.”

A send off was given to Private Fred Bausch last week in the hall. The guest was presented by Cr Geo Martin, on behalf of the residents, with a wristlet watch. Opportunity was taken to unveil the roll of honour that has been hung in the hall. It is a beautiful piece of work, done by Mr Luke, and contains the photos of the soldiers who have gone to the front.”

In 1917 photographs that had originally been taken for the children’s page in “The Leader” are published in the book “Almost Human – Reminiscences from the Melbourne Zoo”.

“Messrs. Luke Bros ( Sons of Edmund) , of the Montuna Poultry Farm, Beaconsfield, who are running in the front rank in several Victorian egg-laying competitions with White Leg horns, have secured a special stud cockerel from Mr E. A. Underwood, of Williamstown. This bird is a direct descendant of the sire of a hen which put up the fine score of 315 eggs, and was selected by Mr A. Hart, the Government Expert.”

There is on view at the Kodak Gallery 161 Swanston Street, a collection of interesting photographs by Mr Monte Luke (Son of Edmund) of Sydney, figure studies, landscapes, and flower pieces are included in the exhibition, and in these the photographer has viewed his subjects most artistically paying particular heed to composition and lighting as well as to his developing and printing. Among the figure studies “Eve Gray,” “Monica,” “David Barker,” “High   Priest,” and “Pop Jones” are noticeable for skilful arrangement and harmonious light and shade. Of the landscapes on view “Narrabeen,” “Pioneer Cottage,” and “The   Haze of Evening” are outstanding “The studies of flowers, such as “Hydrangea” and “Irish Elegance” are well composed, and pleasing in arrangement and harmony of tone.”

Mr Edmund Thomas Luke, who died at his home at Beaconsfield on Saturday, aged 74 years, was the first photographer and artist on the staff of “The Age” and “The Leader.” He had been an employee for 43 years when he retired three years ago. About 30 years ago he designed an issue of stamps which was accepted by the New Zealand Government. He was official photographer with the party which inspected sites for the Federal Capital. He has left five sons and three daughters. The funeral will leave his home at 3 p.m. today for the Berwick Cemetery.”