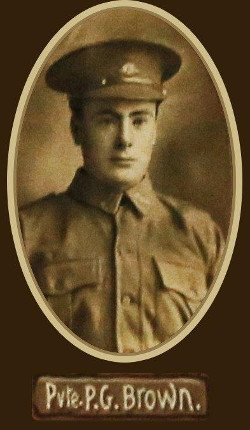 Percy was wounded and hospitalised during his service in the Middle East, he was also admitted to hospital for influenza and pneumonia. He was then transferred to the 1st Australian Field Bakery.

“Percy Brown son of Mr Enos Brown, is also amongst the list of wounded. He played cricket for Upper Beaconsfield and was a fairly decent bat.”

After the war Percy was considered a qualified Baker and took up employment in Pakenham East, Victoria

He married on the 21 March 1925, Avis Myrtle Smith at St James Church, Pakenham, Victoria. During the 1920’s Percy was employed as a Baker in a local bakery.

In the mid 1930’s Percy and Avis then moved to Dromana, Victoria.