On 24thSeptember Albert was wounded in action, a gunshot wound to the right arm. Returned to Australia on the 2ndJanuary 1919. Discharged on the 15thMay 1919. Albert married Olive Maud Shelton; after Olive died Albert  married Lillian Nora Vincent McAllan. 1914 to 1928 Albert was an orchard hand at Beaconsfield Upper. Then tragedy struck.

Beaconsfield Upper, Tuesday; Mrs Beeching a visitor from Melbourne, was spending a holiday with her sister, Mrs Bert Brain, at North Beaconsfield. Yesterday afternoon Mrs Beeching’s son, aged four years, was in the yard with Mrs Brain’s young son, who apparently went to the man’s room and obtained a loaded gun. A report was heard, and Mrs Beeching’s son was found shot in the head. He died a few moments afterward.”

Consequently the Brains moved to Hastings and then in 1942 Albert resided in Footscray and listed his occupation as Boiler attendant. 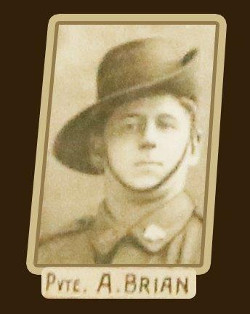 Died on the 26thJuly 1961 at Van Ness Ave, Maribyrnong, Victoria.

Cremated on the 27thJuly 1961 at Western Suburbs Crematorium, Altona.