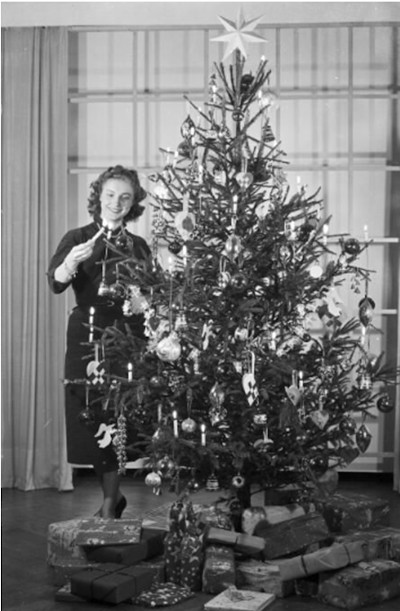 Christmas in Beaconsfield has been a tradition for over one hundred years, similar to the custom of England, and has continued to evolve throughout the years, gradually changing as Australia has socially developed.

The Christmas Tree has been an enduring centre piece to the celebration of the festive season.

Christmas cards were first sold commercially in the mid 1800’s, invented by Henry Cole. He considered they were a pleasant and pleasing way to engage with family and friends at Christmas.

An attractive card with a picture and endearing message would make for a happy exchange, without the bother of a long letter. E W Coles of Coles Book Arcade, Melbourne was happy to stock and sell the cards, he considered them to be “a blessing”.

In the past, a Christmas Bazaar would be held in the local hall. This would be an opportunity for the community to gather, sell and buy various items for exchanging gifts.

The stalls would consist of craft, local produce and baked goods. The Bazaar would often be a fundraiser for a local project or donation for a worthy cause, such as providing Christmas fare for the poor.

There would be musical performances featuring the school children, singing Christmas carols and playing instruments.

There would be signs which would include encouraging slogans, such as “practical gifts”, “useful gifts”, “acceptable gifts”, “attractive gifts”, “something for everyone young or old”, with the reminder that “Christmas comes but once a year”. The residents were all encouraged to participate in the excitement of the season.

For many years after the First World War, Miss Ada Armytage would have an annual party for the children at her property “Holm Park”.

In recent years, Christmas Celebrations in Beaconsfield have continued with Church services, Carols by candlelight and the Christmas Window Competition.