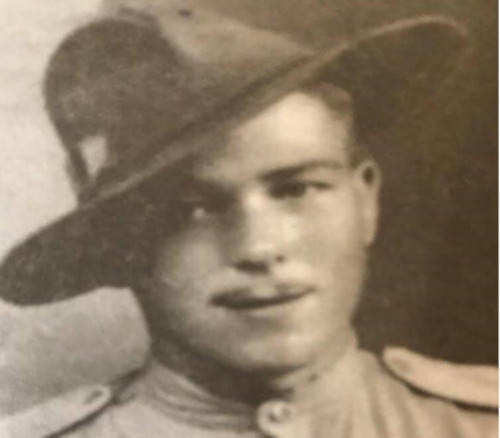 Who was Taylor, A on the Beaconsfield War Memorial?

In 2006 Tony Rushton, a well-known Beaconsfield resident discovered that the name on the Beaconsfield War Memorial was in recognition of the World War 2 soldier Allan Taylor, Service No VX55734.

Allan was the fourth child of the farmer George Anthony and Jessie Catherine (McDonald) Taylor, born in September 1921 at Lancefield Victoria. Sadly, Allan was never to know his mother as she died 3 weeks after his birth in the Kyneton Hospital near Lancefield.

He lived his formative years at Yatpool, Victoria and attended Yatpool State School.

On completion of school Allan worked as a shearer and drover, this is when he met and became firm friends with the Dennis family.

He worked with Ernest Dennis in the Mallee and later stayed with the family in Beaconsfield.

Allan went on to work at his brother’s dairy property in Thorpdale, apparently he did not enjoy dairy farming.

Enlisting at Royal Park, Parkville, Melbourne for the Second World War on 13 May 1941, Allan gave his date of birth as 7 October 1919 increasing his age to be eligible without having to obtain parental consent for enlistment. He gave his brother, Anthony George Taylor living in Childers via Thorpdale, as his next of kin.

His niece, Ellen (Taylor) Purvis, recounts the last the family saw of Allan was him riding his bike from the farm on his way to enlist.

Allan joined the 2/29 Battalion on 3 July 1941 in Bathurst, New South Wales. After brief training for combat, he left Australia on 30 July 1941 and arrived in Singapore on 23 August 1941. Early 1942 the 2/29 Battalion had established position in Malaya where the allies were trying to thwart the advances of the Japanese. By 16 January the strategic town and harbour of Muar had fallen to the Japanese. The 2/29 Battalion were trying to hold their position, but with the constant attack by the Japanese troops on the ground and the assault from aircraft, it meant the 2/29 must draw back to the edge position of the 2/19 Battalion. All day the fighting continued, as night fell the severe loss was palpable. During this battle would be the most likely demise of Allan, documented as wounded on 18 January, Pte Allan Taylor, C Company was reported as “Killed in Action” on 20 January 1942 and is buried at Kranji War Cemetery, Singapore.

Allan was awarded four medals, 1939/45 Star, Pacific Star, War Medal and the Australian Service Medal, they were despatched on 4 October 1951. The family never received the medals, apparently, they were posted to Childers, Queensland instead of Childers, Victoria. The location of the medals issued is unknown.

It is understood that at Ernest Dennis’s request Allan Taylor’s name was included on the Beaconsfield War Memorial.