On the 8thOctober 1918 Rupert was reported as wounded in action, gassed.

“Bombardier Rupert Williams, son of Mr E Williams, headmaster of Beaconsfield State School, left England for Australia last month. The soldier was twice gassed in France, but hopes are entertained that the sea voyage will restore him to health. His only brother, Fred, was on the Barambah, but was lucky enough to escape infection, and land safely in England.”

Returned to Australia on the 9thDecember 1918.

Rupert married Bertha, they lived in Hamilton and then Sandringham, Victoria. He returned to his occupation as school teacher. 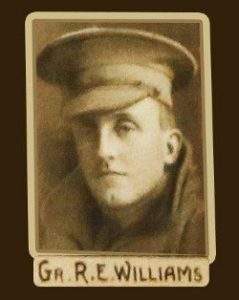 Died in February 1959 at Blackburn, Victoria.

Cremated on the 17thFebruary 1959 at Springvale Botanical Cemetery.