On the 24thApril 1917 Alfred was diagnosed with trench fever. On the 4thMarch 1918 Alfred was hospitalised for an abscess.

“Private A E Warmbrunn of Beaconsfield is expected back from the sea of war at an early date. Pte Warmbrunn was a trench mate of Pte Gamble who made a name for himself.”

In 1937 Alfred was living in Beaconsfield and his occupation was a Lineman. 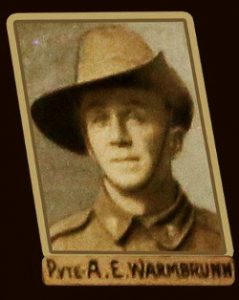 Died on the 27thJuly 1966 at Beaconsfield, Victoria.

Buried on the 29thJuly 1966 at Berwick Cemetery, Victoria.