On the 16thAugust 1916 Richard was wounded in action. On the 17thOctober 1917 he was wounded again, a gunshot wound to his right arm in Rouen, France.

Returned to Australia on the 6thJuly 1919. 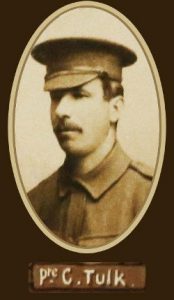 “Private R Tulk late landlord of the Cardinia Hotel, has sailed for parts unknown, with the rest of the troops; he has a brother serving in the Navy.

Eleven recruits went into camp on Monday from Beaconsfield. The number includes Messrs Bragg and Tulk, the former was the Licensee of the Central Hotel, the latter the Cardinia Hotel.”

Died on the 29th September 1964 at Bundaberg, Queensland.