At the time of enlistment his parents were both deceased and his only sister’s address was unknown. John and his sister grew up in an orphanage. 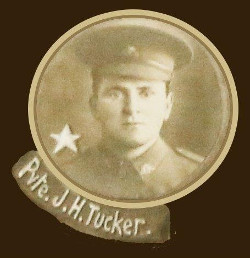 On the 3rdSeptember 1916 John was killed in action “in the forest” in Belgium.

He is buried at Woods Military Cemetery, Zillebeke, Belgium.

“News was received in Beaconsfield last week of the death of Private JF Tucker, who was killed in action in France on the 3rd of last month. He was in the employment of Mr AW Shorthouse when he enlisted and made many friends, all of whom will regret to hear of his death.”

“They miss him most who knew him best.”

On the 15thDecember 1920 Mr Shorthouse applied to have John’s war medals.