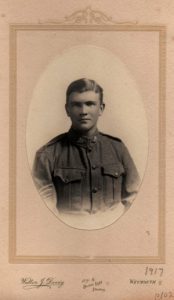 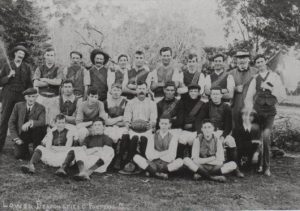 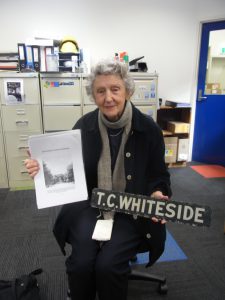 An article about the life of Thomas Clair Whiteside.

Sergeant Thomas Clair Whiteside, 59th Battalion, Australian Imperial Force. He was known as Clair amongst the Beaconsfield/Officer and Berwick communities.

Clair was born in California and at the age of 15, he emigrated to Australia with his parents, William and Sarah (Sally) and 13 year old sister, Mary. In 1909, the family purchased a 33 acre property on a road which divided the township of Officer and Beaconsfield. The road is now known as Whiteside Road.

Clair worked on the family’s property and by the age of 16 he planted a 15 acre apple orchard.

On 4th August, 1914, war was declared between Germany and France. The German army was entering Belgium. Britain joined with France to try to stop the German forces before they invaded Belgium and turned on Russia and the British Empire.

The Allies quickly rallied to assist and support Britain’s decision to fight for freedom and the right of self government. The Australian offer to the Allies of an Australian expeditionary force was accepted and on 6th August the Australian Commonwealth Government called for volunteers for the Australian Imperial Force. Volunteers came forth in numbers.

By early December, thousands of men had sailed from Australia and New Zealand and were training in the sands of Egypt where they remained until the Dardanelles campaign. Months of training and the gruelling work in the hot sandy conditions made the troops fit for the ordeal that lay before them and made their part in the historic landing on Gallipoli possible.

It was the long and bitter struggle of the Gallipoli campaign and the resulting huge and tragic loss of life that brought home to the Australian people the seriousness of the situation. Events on the Western Front were causing great concern to the Allies who realised that an all-out effort had to be made to combat the aggressors.

A recruiting campaign in Victoria, and all other states quickly brought forth many volunteers. One of those was Clair Whiteside.

On 25th July, Clair went into camp at Seymour. He was with the 6th Reinforcement/22nd Battalion.

At the time, Seymour was the largest encampment in Victoria holding about 18,000 men. Many came from a wide area throughout Gippsland, quite a number already known to Clair. He enjoyed the comradeship. There were local boys from Beaconsfield, Upper Beaconsfield, Officer, Berwick, Harkaway, Narre Warren, Cranbourne and Emerald.

In October 1915, Clair set sail on the ship Ulysses for the Middle East. Over the next few months, Clair underwent further training until he was sent to France in June 1916.

taken prisoner in just one night. Clair was one of only 78 out of 1,000 men in his battalion, (the 59th) to return to their lines.

Clair was shot in the head and was transferred to the 3rd Southern General Hospital in Oxford, England.

Clair Whiteside wrote over 200 letters to his parents and sister during his service.

This letter, written on 28th July, 1916, details his experience in the battles of Fromelles, 9 days earlier. The letter was addressed to his mother.

“Dear Mother, on the morning of the 19th, plans were given out to the NCO’s who in turn had to get to their sections and grenade parties up to the pitch. After dinner, a pot of old pig potatoes and a lump of PIG, we went down to the trenches to our relative positions. Did not get there without some trouble for communication trenches were under high explosive fire. Our platoon sergeant, Wally White was killed and a private got buried. Never learnt who he was, though I gave an order for the last man to clear him out.

Well, we hugged the trenches for a few hours while the curtain raiser, the artillery duel was on. When its chief job was done, viz wire-cutting, the hour was up. The first thin line of heroes get on the parapet and make off for the opposing lines. The first lines fare the best – for the terrible machine-gun is deadly once he sees the game is properly on. It looked like putting up cardboard nine pines in a hurricane – only it was human beings who were facing up to it.

A good number were wounded before the charge, but a short distance into No-Man’s Land and the grass was thick with them. I was holding my rifle over my knee, in a sitting position against the parapet, when an ugly lump of shrapnel hit the rifle near where I was holding it. It cut through the wood work and made a good dint in the barrel. Number one lucky one. But I had plenty more let-offs awaiting me. Advanced in short rushes taking advantage of any cover.

No-Man’s Land has a lagoon and ditches – waste deep in water. Waded through the ditches glad of the cooling off but the lagoon had to be got around. It was at the ends of the lagoon where the planks crossed a ditch that the machine-guns got their haul. It was jump jump jump over some poor beggar the whole time, but it was pat yourself on the back at the other side. The going on the other side was better and with the chaps well spread out, and taking plenty of advantage of the grass, we were not suffering so heavily. Of course plenty were unlucky and came in full contact with one of Fritz’s iron foundries. I never knew I would be so anxious to get at Fritz as I was. I simply couldn’t put any time on the grass. Called to a few chaps beside me and cleared on a bit further, until in a very short while, I was ahead of the first two lines.

The order for the 3rd wave was not to stop at the enemy’s first line but to carry on to his supports. But here I got pulled up. I arrived at Fritz’s front door and was quizzing around to see if our fellows had knocked anywhere. A machine gun was rat ta tat tapping in the grass a few yards to my left and it was while trying to learn something about its crew that a sniper caught me.

Got a nasty one on the head and of course, for a minute, thought I was done for. Had the sensation a poor rabbit gets when you hit him on the ears. Did not go around in a circle like poor old raw bunny but I can tell you it seemed to lift me bodily. However I had a heaven sent vision of beef tea and chicken and thinking Fritz might not have too many chooks on hand, or not feeling disposed to give them out to the fighting ‘kangaroos’, I made towards our own base and the ticklish part of the game started.

Could not crawl straight back over heights and hollows. That would have made an avenue in the grass which would have invited a machine-gun to turn down. Any undue movement of the grass, and if you didn’t know before, you soon found out what real war was all about. I absolutely astonished myself on my scouting capacity. Zigzagged twenty or thirty yards back to my left then crawled forward into a thick patch and zigzagged back to the right. The first 30 yards, two bullets went through my old iron helmet and I just recorded a hit on the right shoulder – now only a scratch mark.

Came on my chum, Corporal Frank Dixon a short way back. He, with four or five others, was taking the wisest course under the circumstances, waiting for something to turn up. Don’t know how they fared. I kept the cover of my old gas helmet jammed up to my forehead to stop the bleeding. At this stage our own artillery, thinking they had not opened up the way enough, started again. A shell lobbed in the exact spot where I had been hit and once more I counted my blessings and decided for a still safer spot. There was a dry ditch three or four feet deep on a rise on the enemy side of the lagoon. Worked back to it and found it full but it was stacks on the mill in a position like that. It was ‘mind my arm – get off my legs’. The whole principle was to keep down and hug terra firma. Here I stuck till after dark and it was a warm spot. Was in the direct line of fire between the well-shelled tracks to the side of the lagoon and German guns working from straight ahead and almost every angle.

It’s interesting, though none too pleasant, speculating whether you are going to get the full effects of a shell, a mild earthquake or merely a ton or two of dirt on top of you. Had my old helmet lying on my head. I could not sum up enough energy of the kind to put my field dressing on. Did not feel shellproof but did feel totally indifferent as to how much dirt lobbed on me. The old ditch shook many a time suggesting there was a way through to Australia. Wouldn’t have taken it if it had opened up – I don’t think! After the programme of shells and flare rockets had continued for a couple of hours into the night, one of our company fellows, Bill Skinner from Trafalgar, and I decided to make a bolt for our trenches. There seemed little likelihood of the curtain ringing down for the night and no probability of refreshments. It’s a most unpleasant side of warfare, lying out in a battlefield wounded, maybe perfectly helpless with no chance of aid being given you. It must be bitterly cruel to the man nearly out to it.

As the communication trenches were blown to pieces they advised us to abide where we were for the night. That I did and slept the remainder of the night with my head in the old tin helmet. Better than I have slept since.”

The quotation above is extracted from the book “Elizabeth Whiteside, A valley in France; First World War letters”, Beaconsfield, Whiteside, 1999.

Clair spent a day in a field hospital where he was transferred to a hospital ship en route to Dover and finally received treatment at Southern General Hospital in Oxford.

Once recovered from his wounds, he was eventually sent back to the fighting in France but was wounded a second time at Bullecourt in April 1917. This time Clair was hit by shrapnel from an Allied shell.

Clair was also involved in the Harbonnieres campaign in France in 1918.

He was involved in further heavy fighting around Peronne before the war came to an end three months later. He was one of the lucky ones given a quick passage home and he arrived back in Melbourne on 15th January, 1919.

Clair married Kathleen Cunningham on 19th July, 1923. This was a significant date as it was on the 7th anniversary of the “Battle of Fromelles”.

Clair and Kathleen had 6 children.

Clair went onto be a councillor and Shire President for the Shire of Berwick.

Amongst a long list of achievements, Clair was instrumental in the construction of the Officer Memorial Gates which was erected at the entrance of the Officer Recreational Reserve on the 11th of November, 1951. The gates were in honour of the men from the Officer District who had lost their lives in the two World Wars.