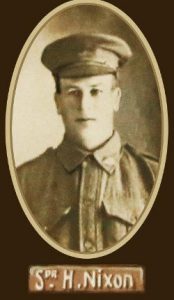 Died on the 31stDecember 1959 at Beaconsfield, Victoria.

Cremated on the 5thJanuary 1960 at Springvale Botanical Cemetery.

At Pakenham 10 out of 14 succeeded in passing (an examination of recruits for Military Service). Harry Nixon, of Beaconsfield, also passed last week in Melbourne.”

“At Beaconsfield last Saturday evening a presentation was made to Private Harry Nixon by a few personal friends. The presentation consisted of a case of silver mounted pipes and an embossed wallet on which was engraved name and date of presentation. The presentation took place at Mr W Paternoster’s private residence, and was made by Mr Lyle. Mr H May spoke in kindly terms of Private Nixon, and all present expressed appreciation of his action in undergoing an operation to render him eligible to enlist. Mr E Williams responded. Heartfelt wishes for Private Nixon’s safe return were expressed, and all joined in singing “For he’s a jolly good fellow”.”