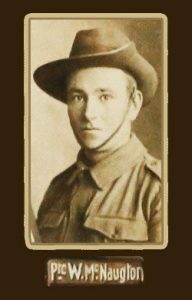 Private M McNaughton who is serving with the Expeditionary Forces was entertained at a Valedictory Social evening here on Tuesday night and presented with a wristlet watch, a silver cigarette case, and a wallet. Mr Adams made the presentation and was supported by Mr Bragg and Mr E Williams. A most enjoyable dance followed.”

“Pte M McNaughton of Beaconsfield, who came over from Egypt as a guard on one of the ships carrying sick and wounded men, has gone back again. This time he takes his brother Hughie with him.”