Signaller George Manning (wounded) is the fifth son of Mr and Mrs J G Manning, of Beaconsfield, formerly of Beechworth. He was employed at “The Don” drapers, Collingwood and reached Malta Hospital on his 21st birthday. George was inflicted with a gunshot wound to his thigh. 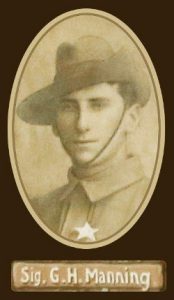 “The death is announced of Private G Manning, son of Mr Manning of Beaconsfield. Private Manning was a member of one of the first contingents that left Australia, and was at Gallipoli for some months. Early in the campaign he was wounded and had to go to hospital for a time. On his recovery he was again sent to the front, where he had the misfortune to be wounded a second time. His parents received the notification of his death last week. The bereaved family have the deep sympathy of the whole community in their sad loss.”