On the 27thFebruary 1917 Herbert was killed in action. 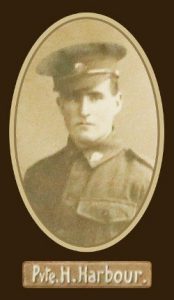 “Mr J Harbour of Beaconsfield received the sad news of the death of his son, Driver Herbert Harbour, reported killed in action. Deep sympathy is felt for his relatives. Driver Harbour was a steady, hard- working young man, well known and well liked. He had been in France for some months doing “his bit” for his native land.”