On the 10thSeptember 1919 Cecil’s mother wrote a letter requesting Cecil’s return to help on the orchard. Cecil was already on board the ship “Euripides” having left England on the 7th September and expected to arrive in Australia the second last week of October. Returned to Australia on the 20th October 1919. Discharged on the 19thNovember 1919.

Cecil returned from the war and lived in Beaconsfield, his occupation was an Orchardist. 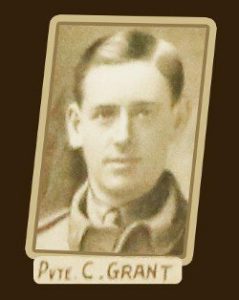 Died on the 10thAugust 1979 at Heidelberg, Victoria. Cremated on the 14thAugust 1979 at Springvale Botanical Cemetery. Cecil was an avid writer as a child. The following story was printed in the Children’s Column, The Bathurst Times, Saturday 11thNovember 1911.

“I would like to tell you a little about Toomuc Valley. It is about six miles from Pakenham Station, which is on the Gippsland line in Victoria. The Toomuc Valley Creek runs winding in and out with maidenhair fern growing along its banks under the trees. All around are high hills where live plenty of kangaroos and wallabies. There are a good many orchards but the Toomuc Valley Orchard is the largest. At the entrance of this orchard the creek has been widened out to form an artificial lake. In the lake are one or two islands and a few little bridges, here and there add to the scene.