Died on the 21stSeptember 1917 as a result of shrapnel wounds to the abdomen. 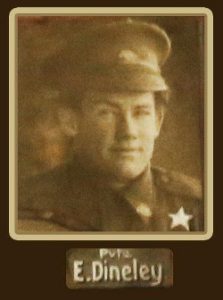 “Dineley- In sad and loving memory of our only son, Lance-Cpl Edward Bernard Dineley who died of wounds in France September 21, 1917 (Inserted by his Mother and Father).”

He died at the 2nd Canadian Casualty Clearing Station in Belgium.

Buried at the Lijssenthoek Military Cemetery in Belgium.