Jack trained in both Mt Martha and Seymour before departing from Sydney for Singapore on 3 October 1941. In February 1942 Jack was “wounded shell shocked” and on the 26 February he was listed as a Prisoner of War. The following year on 24 April 1943 Jack died as a POW from Dysentery in Burma. He is buried at the Thanbyuzayat War Cemetery, Thanbyuzayat Mon State Myanmar, Burma. 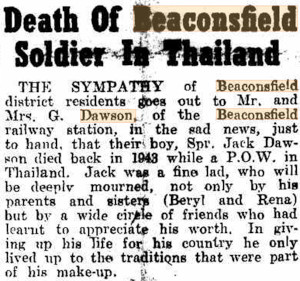