John Leslie Christie was killed in the vicinity of Moquet Farm, France. He is listed at the VC Corner Australian Cemetery and Memorial, Fromelles, France. On the 3rd February 1963, Miss Noreen Binding, 132 Walker Street, North Sydney, New South Wales wrote to the record office enquiring about the grave of John Leslie Christie, she was informed there is no known grave. 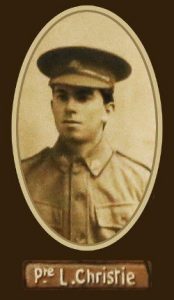 “Christie – In loving memory of our dear son, Les, who was killed in action at Pozieres, July 19th, 1916. We miss him most who loved him best. Also, in memory of his comrade and our dear friend, Steve Sleigh, killed in action on the same day. With other comrades they played their part, and did their duty with a loyal heart. (Inserted by his loving parents, sisters and brothers, Beaconsfield.)”