Arthur Robert Bragg married Emily Culverwell (Curel) on 19thJanuary 1908 in Queensland. On the 4thSeptember 1913, the License for the Gippsland Hotel, Beaconsfield, was transferred from Mr Umhauer to Mr Bragg. At a Valedictory Social evening on the 19th May 1915 Arthur was the Chairman. 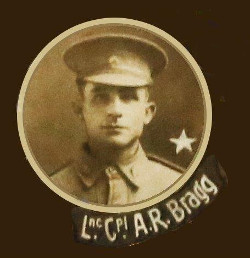 Emily Bragg applied for a transfer of the Central Hotel, Beaconsfield, from her husband, Arthur Robert Bragg who is going to war. Mrs Bragg gave evidence that she intended to carry on the business during the absence of her husband- Granted.

Arthur Robert Bragg and Emily Bragg were granted a divorce on the 25th November 1915.”

Letter to Officer in charge of Base Records, Melbourne (4th March 1917)

“I am very anxious to know as when we hear of them missing it keeps us hoping on. Perhaps you could now give me something definite as it is more than 6 months now. Could you also inform me about his Will if he left any? I am sorry to trouble you so much but I hope under the circumstances you will forgive me and send me a few particulars of his Will as nothing you sent would hurt me now”.

“ No further information is available, every endeavour is being made by the British Army authorities to obtain definite information concerning these issues, and any further reports received will be promptly transmitted. In the mean-time it is regretted nothing can be done from this end”.

27thOctober 1921 No burial particulars have been received.