Frederick William  Bausch returned to Australia on the 3rdJuly 1919. Discharged on the 25thOctober 1919. On the 18thDecember 1920 Frederick married Hazel Jessie Louise Williams. In 1924 Frederick and Hazel moved to Mologa near Bendigo, Victoria. 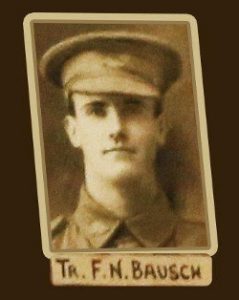 A send off was given to Private Fred Bausch last week in the hall. The guest was presented by Cr Geo Martin, on behalf of the residents, with a wristlet watch. Opportunity was taken to unveil the Roll of Honour that had been hung in the hall. It is a piece of work, done by Mr Luke, and contains photos of the soldiers who have gone to the front.”