Significance of the red poppy of remembrance

The red poppy has become a central symbol of remembrance for soldiers who served in World War One and later conflicts. In the words of the Australian Army:

“Australians wear a Red Poppy on Remembrance Day for three reasons. Firstly, in memory of the sacred dead who rest in Flanders’ Fields. Secondly, to keep alive the memories of the sacred cause for which they laid down their lives; and thirdly, as a bond of esteem and affection between the soldiers of all Allied nations and in respect for France, our common battleground.”

Increasingly the red poppy is being used in Anzac Day services and parades as  well as its traditional use on Remembrance Day in November.

The use of the poppy as a symbol of remembrance started after the end of World War One. It’s genesis was a poem written by a Canadian Medical Corps doctor, Major John McCrae. McCrae wrote the poem as an outlet for his grief following the death of one of his friends. The poem is titled “In Flanders Fields” and reads as follows:

In Flanders fields the poppies blow
Between the crosses, row on row,
That mark our place: and in the sky
The larks, still bravely singing, fly
Scarce heard amid the guns below.

We are the Dead. Short days ago
We lived, felt dawn, saw sunset glow,
Loved and were loved, and now we lie
In Flanders fields.

Take up our quarrel with the foe:
To you from failing hands we throw
The torch; be yours to hold it high.
If ye break faith with us who die
We shall not sleep, though poppies grow
In Flanders fields.

McCrae was not happy with the poem he wrote and discarded it as rubbish. Fortunately it was retrieved by another soldier who sent it to the press in England. The poem was published by the Punch newspaper in December, 1915.

The poem mentions poppies because they grew profusely in the fields of Flanders where significant battles occurred. They were often the first signs of plant life to emerge in the muddy battlefields when the fighting subsided.

After the war, the British Legion searched for a symbol which honoured the dead and could be used to financially assist the living relatives of soldiers.

The British League adopted the idea in 1921, with the following statement:

“The Returned Sailors and Soldiers Imperial League of Australia and other Returned Soldiers Organisations throughout the British Empire and Allied Countries have passed resolutions at their international conventions to recognise the Poppy of Flanders’ Fields as the international memorial flower to be worn on the anniversary of Armistice Day.”

The Returned Soldiers League (RSL) in Australia sells poppies and other symbols each year in November to raise funds to help relatives of our soldiers.

At the Shrine, a monument to the poppy has been constructed around a rear underground entrance to the building. It features a very large red poppy suspended in the air with metal cables as shown in the image below. 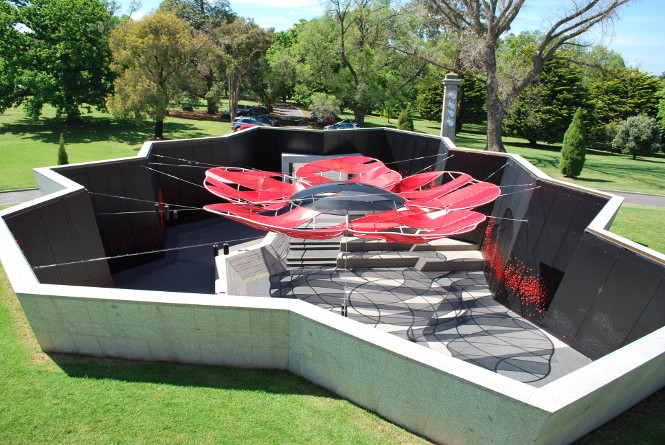 A magnificent monument to the poppy at the Shrine of Remembrance 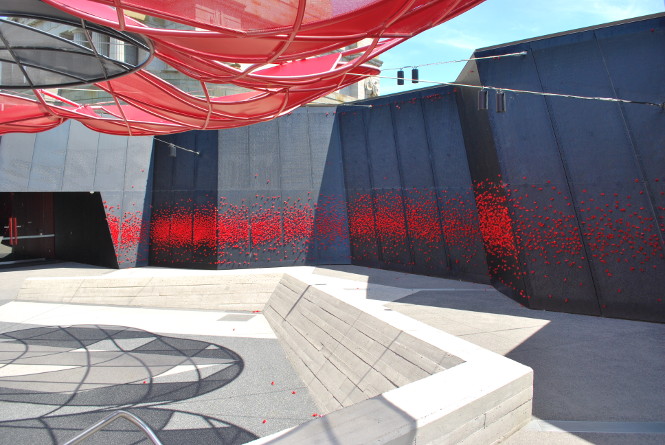 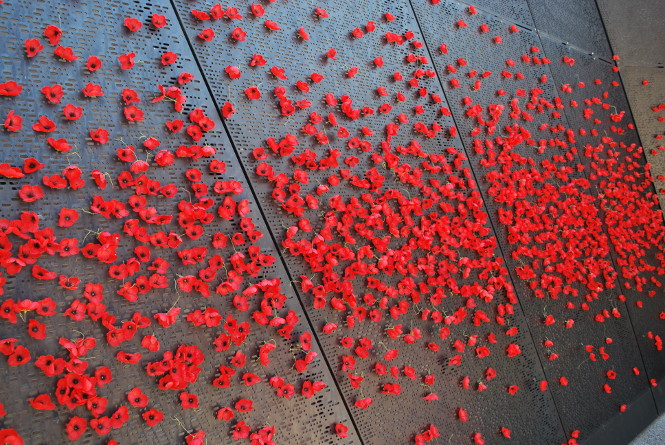 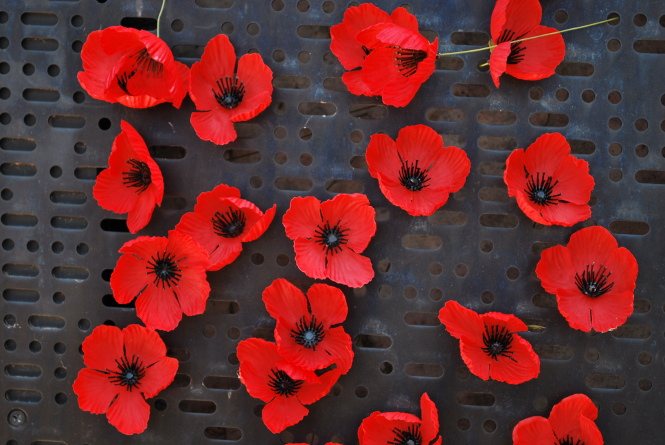 A wonderful display of knitted and crocheted poppies filled Melbourne’s Federation Square on Anzac Day 2015. This started as 5,000 poppies and grew to  300,000 as more people contributed their poppies. The display toured around Australia and later went to the Melbourne Flower and Garden Show. The display made such an impact, that it was taken to England for the Chelsea Flower Show. Poppies were mounted on stems and taken to Fromelles to commemorate the Centenary of the Battle of Fromelles.

A blanket of poppies knitted by residents of Beaconsfield and displayed at the Community Centre, is shown in the image below. 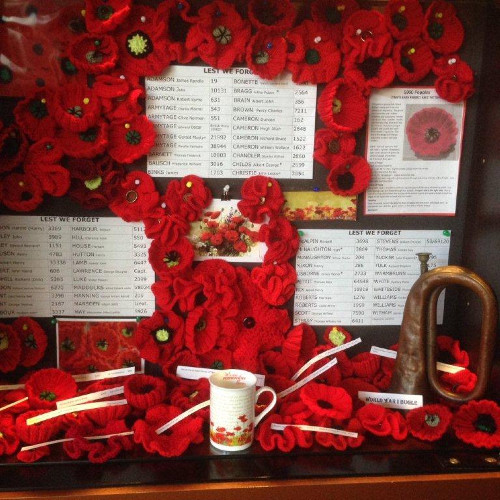 Photograph taken by Josie Meyer and used with permission

In 2017 purple poppies were knitted as a tribute to the animals who served in war. They were displayed in a horse rug at the opening of a memorial to animals in war erected at Pozieres in July 2017. (Article in Beaconsfield Banner Winter 2017 p. 10-12 Vivienne Williams, Animals in War the forgotten army). 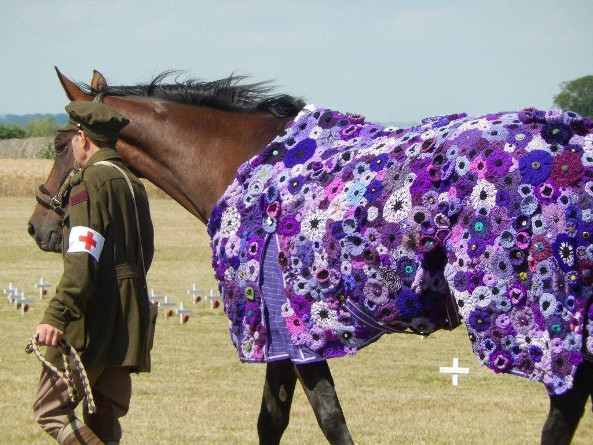 To commemorate the 100th anniversary of the end of World War One, on Remembrance Day, November 11 2018, the Australian War Memorial in Canberra plans to create a carpet of 60,000 red knitted and crochet poppies, to represent each soldier whose life was lost.